Culture-based solutions: A strength of growing reconciliation with land and seas through faith, community, and nature 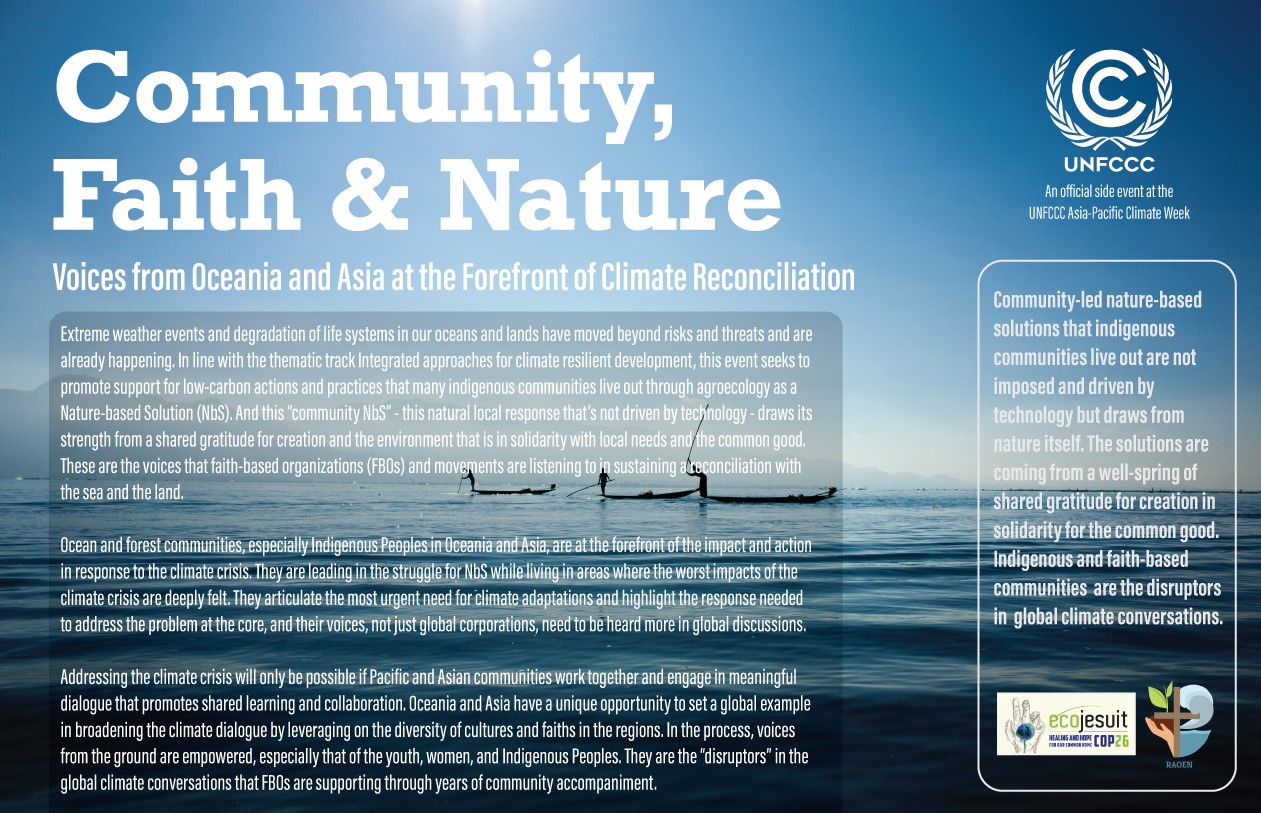 Culture-based solutions: A strength of growing reconciliation with land and seas through faith, community, and nature

Members of indigenous and local communities, faith groups, youth representatives, and other voices from Oceania and Asia shared their climate realities and the culture-based solutions they practice and apply in response, as they gathered online during an official side event to the UNFCCC Asia Pacific Regional Climate Week.

Organized by Ecojesuit and the River above Asia Oceania Ecclesial Network (RAOEN) on 6 July, Community, Faith, and Nature: Voices from Oceania and Asia at the forefront of Climate Reconciliation highlighted the role of interfaith dialogue and accompaniment in supporting and empowering indigenous and local responses to climate impacts. 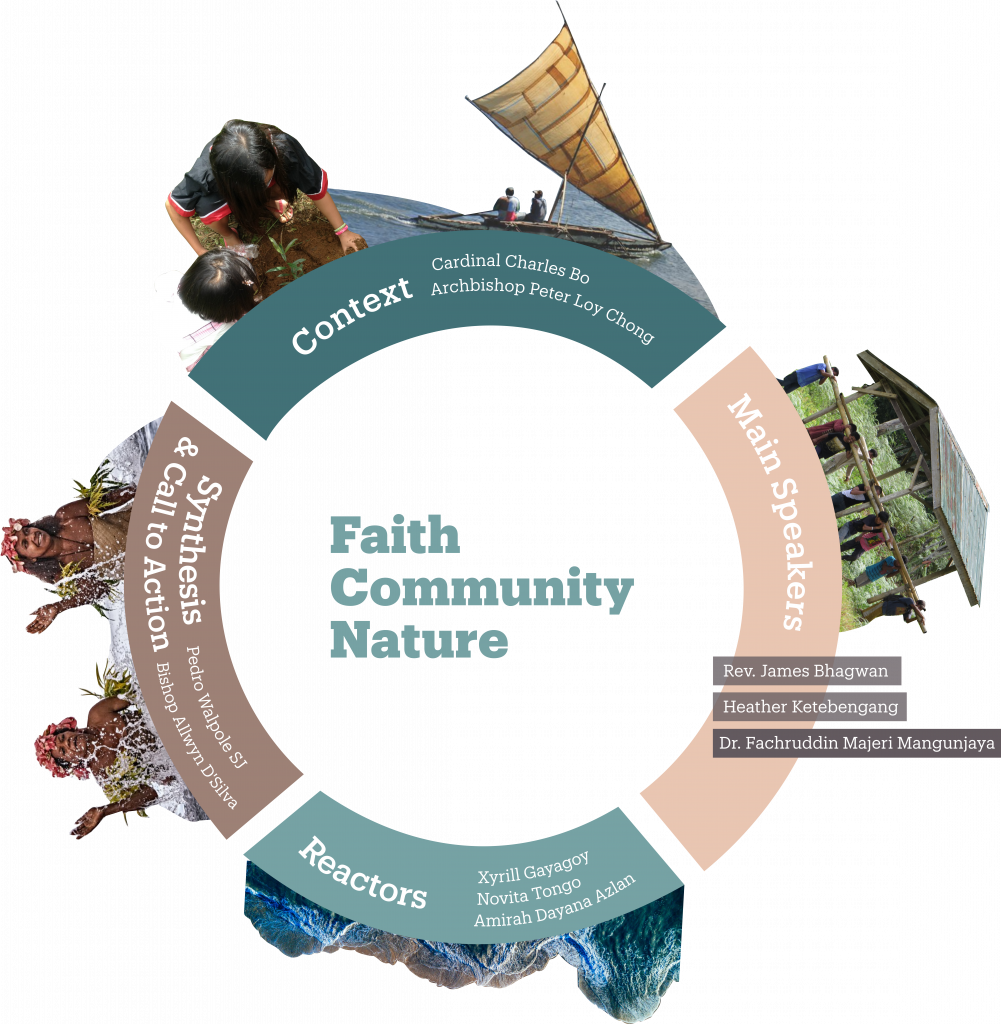 Cardinal Charles Maung Bo (Archbishop of Yangon, Myanmar) and Archbishop Peter Loy Chong (Archbishop of Suva, Fiji) shared the climate and community context as Reverend James Bhagwan (General Secretary of the Pacific Conference of Churches in Fiji) and Dr. Fachruddin Mangunjaya (Chairman of the Center for Islamic Studies in Indonesia) each discussed the role of interfaith dialogue in empowering local communities in addressing the climate crisis. Ms Heather Ketebengang from the Palau Conservation Society presented current efforts in Palau in applying nature-based solutions.

Three young women leaders – Amirah Azlan from Malaysia, Xyryll Gayagoy from New Zealand, and Novita Tongo from Kalimantan, Indonesia – shared their experiences and reactions to the presentations. Towards the end, Ecojesuit Global Coordinator and RAOEN Network Catalyst Pedro Walpole summarized the key points that emerged in the conversation as Bishop Allwyn D’Silva (Auxiliary Bishop for the Archdiocese of Bombay, India) called out an invitation for further action in Oceania and Asia.

Key points that emerged during the conversation:

Nature-based solutions, or NbS in the language of the climate change talks, are primarily learnt from culture, where indigenous communities naturally implement these solutions with a sense of care and relationship with their lands and waters. These NbS are in reality culture-based solutions that connect and do not recognize divisions among people and nature, among their communities and the natural world. And as Pedro Walpole SJ noted, “the focus of all speakers is the land, not the market. Nobody has highlighted the market as the answer…These voices from the land and oceans need to be heard.”

In his talk, Cardinal Bo underlined how climate change is an outcome of generations of injustices to indigenous cultures and lands. At the same time, he emphasized their role in climate action, referring to Indigenous People as the “wounded healers.” Archbishop Loy Chong called for climate reconciliation that begins with empowering and accompanying those who are vulnerable and marginalized. “Reconciliation begins with the victims and how you empower the victims to embrace the vulnerability and bring about conversion. How do you empower the victims so that they become the gate to bringing about conversion?”

There is a shared sense of responsibility among all faiths in reweaving the ecological mat towards an alternative paradigm of development that recognizes economic, ecological, and ecumenical aspects as integral. Reverend Bhagwan shared how indigenous spirituality is an expression of indigenous knowledge that cares for the land and seas. The role of faith communities is in engaging in a process of ongoing decolonization. “In this third decade of the 21st century, we – the churches, civil society, Pacific academia, conservationists, practitioners of traditional arts and culture – all call on our region to reweave the strands of the mat on which we sit, a mat which has become frayed. This involves removing toxic strands and weaving in those strands that colonialism, neoliberalism and all those “isms” replaced – and these are ecology, spirituality, caring, sharing.”

Dr. Mangunjaya shared his experiences in working with multiple sectors and how faith communities in different areas are taking action to influence change from local, national, and regional levels. He gave the example of the the Indonesian Islamic Council which issued a fatwa (the highest ruling in Islamic law) in 2016 that described as a sin for people to deliberately burn forests to clear the land for growing crops. “Even though it cannot be enforced, the unprecedented rule sent a strong message to a country that hosts the largest Muslim population in the world, at 225 million. The government at the time said it hoped the moral impact of the fatwa would help reinforce laws against forest burning and prevent air pollution events.”

The inputs and insights from the young women leaders Amirah Azlan from Malaysia, Xyryll Gayagoy from New Zealand, and Novita Tongo from Kalimantan, Indonesia focused on the ecological concerns they experience and also the actions taking place in their communities, highlighting the role of intergenerational action, community, trust-building, and the value of youth platforms for their voices to be heard.

Amirah talked about her work in GEMA, a youth organization in Malaysia that advocates environmental awareness and action, and how she views environmental work as a blessing and a shared responsibility where we, as “caretakers of this earth,” are accountable.

Showing examples from New Zealand, Xyryll spoke about the strength of collective action and having the voices of the youth included in the shaping of policies. She mentioned the Nationally Determined Contribution of New Zealand and its role in reducing the greenhouse gas emissions of the country.

Novita talked about healing the land and bringing community together in responding to the impacts of drought and water contamination due to mercury. She initiated efforts in bamboo planting after noticing its ability to hold water. Despite experiencing difficulties at first, her community eventually supported her, and government officials and private companies are now asking to collaborate with them.

Bishop D’Silva, in his invitation to further action, highlighted the strength of local stories and experiences and the critical role of interfaith dialogue in bringing together local voices and facilitating reflection. He called for collaborative action towards a “blue economy” in COP26 in November, where the health of the oceans and the climate are important focuses for decision-making.

This side event is part of an ongoing series of engagements of Ecojesuit and RAOEN towards COP26 in November and beyond. To view this UNFCCC Asia Pacific Climate Week side event and explore other resources from the dialogue, visit: https://cop26.ecojesuit.com/asia-pacific-climate-week/

1 thought on “Culture-based solutions: A strength of growing reconciliation with land and seas through faith, community, and nature”