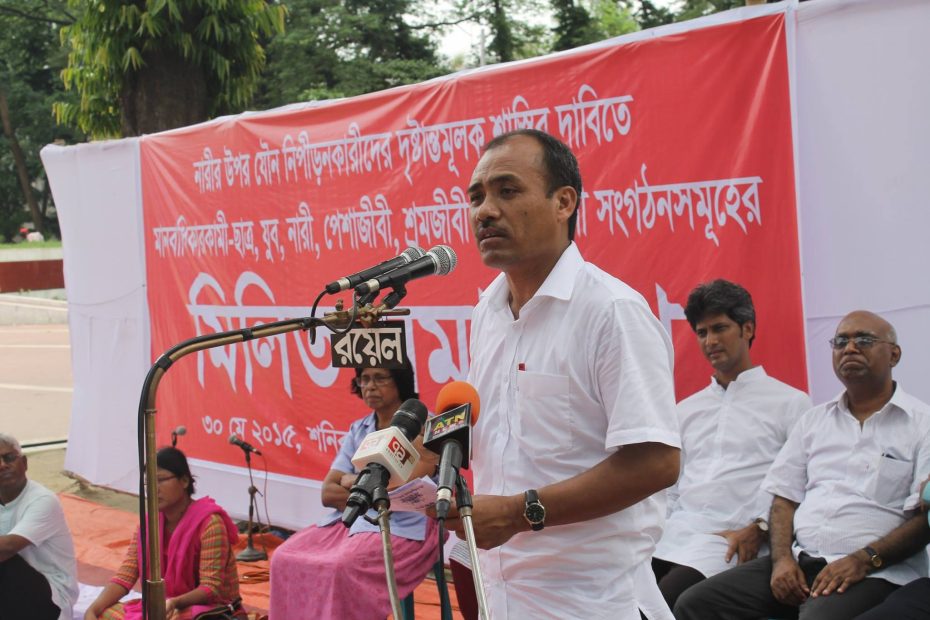 Sanjeeb Drong, General Secretary of the Bangladesh Adivasi Forum, shares to the River Above Asia Oceania Ecclesial Network (RAOEN) the historical injustices and present challenges to Indigenous Peoples in Bangladesh.

In his reflection, Sanjeeb highlights that the need to support and promote Indigenous Peoples rights is integral to responding to the cry of the Earth.

I am very much enlightened by the speech of Cardinal Bo and also Sr. Mariana from Fiji. We, the Garo people also have totems. We have lots of stories connected to the hills, mountains, lands and the rivers.

The government recognizes 50 indigenous communities they call tribal communities just 2 years ago 2019. We don’t have still disaggregated data how many Indigenous population live in Bangladesh. But according to our indigenous organization, we claim that more than 3 million Indigenous Peoples live in Bangladesh. And they had been facing gross violations of human rights, recognition and celebration of cultural diversity. And even the environmental degradation, conflict, forced migration, destroying natural forests in the name of national parks, reserved and protected forests and ecotourism polluting seas, rivers, and water sources.

The world view is different. We the Indigenous Peoples and my community Garo, we treat the mountains and the hills as our brothers and the streams, the rivers are our sisters. That’s why we, the Indigenous Peoples in Bangladesh did not register our land, and territories, and the forest land so many Indigenous Peoples including my community the Garos, Maghupur Forest, the Garo Hills, and the Khasis in the Khasi Hills and people in the Chittagong Hill Tracts have been living in their ancestral customary land for centuries but they could not register their land that is why government declared these land as national parks, reserved and protected areas, sometimes eco-parks, and conflicts are there.

That’s why we didn’t register our land, because, even in my Garo Achikku language which we call hill people language my own mother language we don’t have the word registration or land grabbing because we cannot grab the land. Because we belong to the land; the land does not belong to us. This was our world view.

But lack of recognition of this distinct culture of land ownership is a big issue in Bangladesh. Because of our movement, in 2008, the present government recognized that a separate land commission should be founded for solving the problems of Indigenous Peoples, but still, this is not happening.

And in our rivers around the area, forests are disappearing where people live. Endless human greed is destroying the natural world. The recognition of the cultural identity, cultural diversity, and even different land ownership system of Indigenous Peoples are very, very important. We also face eviction from our ancestral land. Even the word ancestral, the word is not popularly known. So, we are trying to make the majority community aware about our Indigenous Peoples rights.

Because we don’t destroy the natural world, because we treat that land is life for us. Some indigenous communities live in their territories and migrating to other places, and the big companies, corporations are going to indigenous areas. Even at this moment we are protesting the building of a 5-star hotel. We are trying to convince the government that we don’t want a 5-star hotel in our mountains, in our hills because it destroys the water systems, it destroys the forests. And the tourists often don’t want to understand, to respect and celebrate the diversity of Indigenous Peoples and their culture.

What we do about this, we advocate for promoting Indigenous Peoples rights. We do capacity-building programs for indigenous human rights defenders, community leaders, village chiefs, women and youth for making their voices stronger. We do empowering network and building alliances with civil society members and organizations. Media in Bangladesh, sometimes they publish for promotions of human rights and Indigenous Peoples, but sometimes they like to only focus on the exotic like dances, festival, music, especially the indigenous women.

Finally, we are advocating and promoting for the UN policies for free and prior informed consent of Indigenous Peoples. Bangladesh is one of the most densely populated country. In 56 thousand square miles area, 160-170 million people are here. So, pressure on indigenous land, indigenous mountain and forests are very, very high. So, we have to try to do that, any development project, any national park, or other tourism project cannot be accepted without free prior and informed consent.

I am very much thankful for this opportunity. We are trying to say that, according to Pope Francis, the human cry, what I am experiencing in my country and in my community, we have sinned against nature and Mother Earth. These kinds of feelings should be on thought of the policy makers so that development aggression is not experienced by Indigenous Peoples. We respect the culture of peace and also of tolerance so that Indigenous Peoples and Non-Indigenous Peoples in Bangladesh can live together. Again, thank you RAOEN for this opportunity. God bless you all.