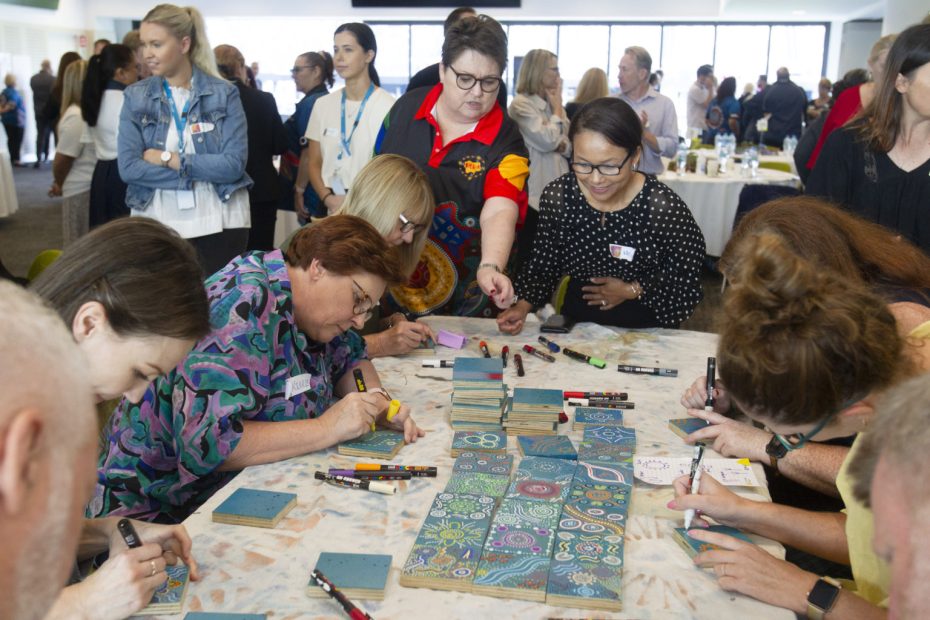 The cries of the indigenous and the earth are loud at the Diocese of Parramatta in Western Sydney, Australia where the largest population of Aboriginal and Torres Strait Islander people live and where two mighty rivers flow through, the Parramatta River and the Hawkesbury-Nepean Dyarubbin River.

And along with the World Heritage-listed Blue Mountains, a component reserve of the Greater Blue Mountains Area, the cries are heard with the heat, flooding, and fires, climate-related events that are part of Australia’s recent history. These are special places as described in all the writings of Father Eugene Stockton, priest of the Diocese, archaeologist, and author of many publications especially in the pursuit of an Australian spirituality.

One of its parishes is listening to these cries. The Holy Family Parish Mount Druitt is a culturally diverse and vibrant Catholic community of around 800 parishioners that includes Tongan, Samoan, Filipino, and Aboriginal communities. Its parish priest, Father Gregory Jacobs SJ is on the diocese’s Laudato Si’ team. The 2022 Season of Creation mass was held in this parish that also hosts two key Aboriginal and Torres Strait organizations on site, the Aboriginal Catholic Services and Baabayn Aboriginal Corporation. From its Pacific Islander community, Tongan and Samoan parish choirs were formed.

Baabayn (which means Ancestral Woman) Aboriginal Corporation was founded by five Aboriginal elders from Western Sydney to provide a place of healing. Aboriginal people can connect here with culture, have a strong sense of belonging, and help in their recovery from past traumas, regain their self-esteem, and realize their potential.

“Our dream is to create a Healing Centre that will give Aboriginal people in the Western Sydney community a place to meet and reconnect with their cultural and spiritual identity. It will also provide a unique connection between community Elders and young people (including parents) through various groups, talks and cultural events, which will pass on the cultural wisdom and knowledge.” (From a quote by Aunty Daisy in the 20-minute video, Stolen Generations)

Schools in the diocese are also listening to the twin cries with the recently launched Reconciliation Action Plan auspiced by the Jarara Indigenous Education Unit, an integral part of how the Catholic Education Diocese of Parramatta shares culture, builds capacity, and provides pastoral care for Aboriginal and Torres Strait Islander students and their families. Jarara is a Wiradjuri word which refers to water tumbling over rocks.

According to Julie Waddell, Lead Teacher at the Jarara Indigenous Education Unit, “Several of our schools have dedicated yarning spaces, cultural groups, and inclusive Aboriginal Cultural Programs. An understanding of Aboriginal spirituality is incorporated into Religious Education programs, prayer, and liturgy.”

Baabayn Aboriginal Corporation and the Jarara Indigenous Education Unit both actively support the work of Murama, one of which is the Murama River Rangers Program.

Dr John Hunter, founder of Murama and a Senior Lecturer in Indigenous Health Education at Macquarie University describes the program: “The Murama River Rangers program recognizes and builds on positive philosophies of learning and leadership. This intergenerational, intertribal, and cross-cultural initiative shares Our Living Rivers vision to transform the Parramatta River and its tributaries into living waterways. The pilot program is based at the Murama Healing Space, Sydney Olympic Park, and aims to engage and develop young leaders and future custodians through activation of the Wangal Walk on the Parramatta River. This includes empowerment, support and shared responsibilities for: operation of the Murama Healing Space; local conservation and environmental stewardship initiatives; connecting people to the River through programs, education, events, and creative arts; and facilitating broader community involvement and capacity building through volunteering opportunities.”

Other First Nation community leaders share that Country takes in everything within the physical, cultural, and spiritual landscape. It includes landforms, waters, air, trees, rocks, plants, animals, foods, medicines, minerals, the sky, and sea, as well as sacred places. It includes cultural practice, kinship, knowledge, ceremony, songs, stories, and art, as well as spiritual beings, and people: past, present, and future.

This is a very Ignatian way of being in the world where all are called to deep listening in the contemplative act of Dadirri in this reflection Inner Deep Listening and Quiet Still Awareness by renowned Aboriginal elder, artist, and educator, Miriam-Rose Ungunmerr-Baumann. She recently shared with the Australian Jesuit Province the dream to yarn one country together and be able to walk together.

During the Second General Assembly of the Fifth Plenary Council of Australia on 3 to 9 July 2022, there were ten Plenary Council Decrees issued. Decree 1 is on Reconciliation: Healing Wounds, Receiving Gifts and gives hope that the cries of the Indigenous Peoples will be heard in the Diocese of Parramatta and beyond.

The Social Justice Statement 2021-2022 of the Australian Catholic Bishops Conference, Cry of the Earth, Cry of the Poor affirms that “we human beings need a change of heart, mind, and behaviour” and exhorts all to care for creation and the most vulnerable people in the worldwide human family. The Australian Catholic Bishops Conference also recognized its unprecedented decision to work towards a more sustainable Church through their commitment to a seven-year journey towards the seven Laudato Si’ Goals through the Laudato Si’ Action Platform (LSAP).

The Diocese of Parramatta joined LSAP and started their seven-year journey with its parishes, schools, and organizations to achieve the seven Laudato Si’ goals. A five-minute video documents the diocese efforts as they started their Laudato Si’ action campaign led by Bishop Vincent Long Van Nguyen, OFM Conv, Diocese of Parramatta and Chair of the Bishops Commission for Social Justice, Service and Mission of the Australian Catholic Bishops Conference. In a January 2020 interview, he spoke of the ecological crisis and the conversion needed:

“Today, we are also challenged to move beyond old patterns of living and behavior, both individually and collectively. In the light of the ecological crisis that demands a conversion of heart and a change of lifestyle, we must have the courage to align ourselves with God’s plan for the world. Only by acting in the best interests of the environment, of the poor and of future generations can we save this planet from devastation.”

Sue Martin is the Reconciliation with Creation Project Officer, Australian Province of the Society of Jesus and Assistant Coordinator of the Reconciliation with Creation unit of the Jesuit Conference of Asia Pacific.Sue is also assisting the River above Asia Oceania Ecclesial Network (RAOEN) that seeks ways for the Church to better honor the knowledge and wisdom of local communities and Indigenous Peoples in caring for Creation and finding a way to connect forests, water (oceans), and people.